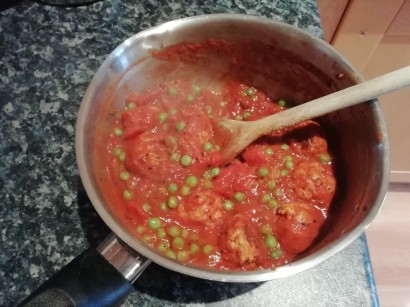 Not to be confused with Turkish kofte, these spiced vegetable dumplings are eaten in northern India. They are often made with cauliflower but you can make them with any root vegetable really: carrot, butternut squash, radish, sweet potato, parsnip or celeriac. I sometimes make them with half parsnip, half beetroot and I’ve suggested a recipe for courgette kofta here. My mum’s neighbours used to make turnip kofta; the Belfast temple often received huge donations of vegetables from a congregational member who we called Michael Vegetable. He was so named because he ran a wholesale fruit and veg business. Making kofta seemed the best way to use up the boxes and boxes of turnips he donated and no-one was ever any the wiser they were eating turnip.

Kofta are made with coarsely grated vegetables and chickpea flour, using a 3:1 ratio of veg to chickpea flour. I often gauge the quantities based on the random veg I have that needs to be used up. They are delicious deep-fried but I’ve suggested baking them here. This should be enough for 3-4 people, served with rice.

2. Shape into golf ball sized balls and place on the baking sheet. Leave some space between each one as they will expand in the oven. Bake for 15 minutes, until golden brown. While they are baking, make the tomato sauce. 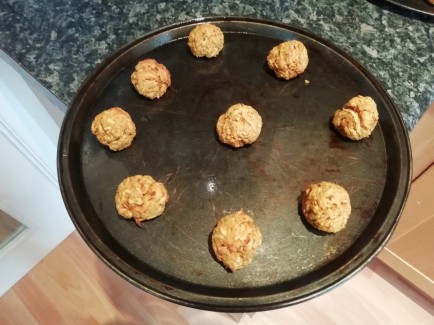 4. Fry the black mustard seeds in a tablespoon of olive oil, followed by the grated ginger and powdered spices. Add the chopped tomatoes and blend with a blender stick if you prefer a smooth sauce before adding the peas and salt.
5. The kofta will soak up the sauce quickly so I put them in the sauce shortly before serving. They freeze well, with or without the sauce. I often freeze kofta and make a sauce on the day. Serve with rice, dal and subji. They are surprisingly filling so two or three per person should be sufficient, served along with other dishes.